So, as a new Twitter user, I really didn’t get it.  I wondered why anyone would care to publicly answer the question “what are you doing?”  I think now I’m starting to understand the power and possibility of Twitter.  Twitter allows you to be in a bigger conversation with many people all the time, especially if you have one of those helpful desktop applications like Tweetdeck or Twitterrific that lets you see everything that’s going on in Twitter all the time.
Since I started using Twitterrific to follow the goings-on in Twitterland, I’ve seen pretty amazing results!  Here’s why Twitter’s a good networking strategy for your business.  In the last week, as you can see from the screenshot below, I have 400 new people “following” me on Twitter.  These are folks who wouldn’t have been exposed to me before.  I ask you, what networking event can you go to where you’ll instantly connect with 400 people? 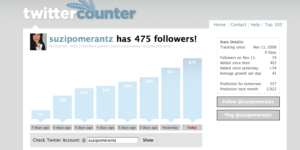 Anyway, out of those new conversations and budding relationships, in the last week my new Twitterbuddies have driven more traffic to my blog and website, bought my book, bought my Rainmaking Made Easy audio training, invited me to be a guest on an international radio show, and I’ve even connected with MC Hammer.  Yes, the rock star. He posted one of my responses on Twitter (called Tweets) on his blog!  Anyway, Twitter is not magic in and of itself.  You still have to know and utilize the Nine Mindsets of Networking that I talk about in my book, and you have to be authentic, generous, and as Bob Burg says, be a “go-giver“.  But definitely get in the game!  It’s like being at a party full of really smart, connected, amazing people and being able to overhear snippets of the best conversations, thoughts, and information bits that people have to share.  And, when you get on Twitter, be sure to follow me and I will absolutely follow you back.  See you in Twitterworld!

Are you in the game yet?  You’re invited!

Great job on twitter! I have been using twitter for a couple months now and have been amazed at how powerful 140 characters can be in developing relationships! The business application is astounding as long as you take the time to interact and get to know people, not just jump in with “buy my stuff” tweets!

Excellent point, Nancy! Yes, just like meeting someone at a cocktail party in real life, you wouldn’t say, “Hi, nice to meet you, buy my stuff” so there’s no reason to do that in Twitter. Until playing in this space, I never would have believed you could actually build real relationships in short tweets, but now I’m a believer — and even a budding addict! 🙂

Thank you for that fantastic overview of Twitter Suzi. Sharing your experience is sure to create a whole lot more twitter-holics! LOL
GREAT NEWSLETTER TOO! It is top-to-bottom full of great info. Keep up the great work!
(For those of you who haven’t subscribed – I recommend it ASAP!)
Paula Woolley