Very interesting! The 2012 International Coach Federation (ICF) Global Coaching Study Executive Summary put together by PriceWaterhouseCoopers (PWC) has been released and paints a mostly rosy picture of the coaching profession! A few highlights: 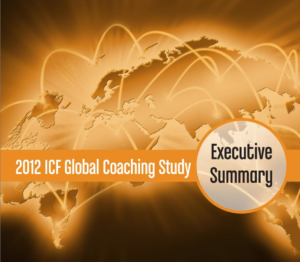 It was designed to be one of the most ambitious pieces of industry research ever conducted on the field of professional coaching. A primary goal was to engage with as many coaches as possible on a worldwide basis, thus providing an up-to- date picture of the profession to help meet the challenges ahead.
The ICF by the end of 2011 showed 19,000 members. The survey was conducted over 6 months, and received 12,133 valid responses. Responses were received from professional coaches in 117 countries. Over 4,400 valid responses were received from non-ICF members. More than 7,700 ICF members responded to the survey. The largest number (3,565) were from North America.
From the available data, it is hereby estimated that there are presently in the region of 47,500 professional coaches worldwide.
When the report got to the part about average annual revenue, I was shocked at how low the numbers were. I suppose the results would have been vastly different if the survey was only conducted on Executive or Business Coaches. Most of the Executive Coaches I know are generating six figure revenues annually, but this report states that in North America the Average annual revenue is $50,400. Then the next page indicates that North America’s total annual revenues from coaching exceeds $700 million (and global total annual revenues are nearly $2 billion).
The following are the key themes to emerge from the 2012 ICF Global Coaching Study indicators reviewed in this summary report:
• The profession appears to be growing, with an estimated 47,500 professional coaches generating close to $2 billion (USD) in annual revenue/income.
• The profession remains concentrated in the higher-income regions of North America, Western Europe and Oceania. Collectively, these regions contain more than three in four coaches, well exceeding the 11% share of global population living in these regions.
• Despite the critical mass of coaches found in the higher-income regions, nonetheless, the evidence from the study indicates faster growth in coaching has emerged in markets outside these regions, such as in Latin America and the Caribbean.
• Coaches are looking confidently to the future, with expectations over the next 12 months of increasing demand (clients and sessions) leading to growth in annual revenue and income from coaching.
• Key issues for the future include tackling obstacles such as untrained individuals who call themselves coaches; availing of opportunities to increase awareness of coaching benefits; and answering the question of whether coaching should be regulated.
DOWNLOAD FULL EXECUTIVE SUMMARY REPORT HERE:
2012icfglobalcoachingstudy_executivesummary