Steinem Weighs In On Palin 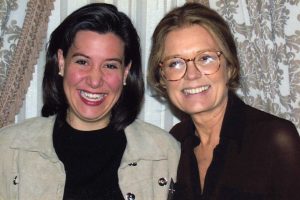 We can’t think about feminist leadership without thinking about Gloria Steinem.  I had the pleasure of having lunch with Ms. Gloria when we were both speakers at the same conference one year and if you’ve ever had the opportunity to meet her, you know she is brilliant, worldly, sophisticated, down-to-earth, funny, irreverent, and delightfully frank.
So, what does Gloria have to say about McCain running-mate Sarah Palin?  She wrote an opinion piece in the LA Times that you can read for yourself here.
Steinem compares her to Hillary Clinton then states, “Palin’s value to those patriarchs is clear: She opposes just about every issue that women support by a majority or plurality. She believes that creationism should be taught in public schools but disbelieves global warming; she opposes gun control but supports government control of women’s wombs; she opposes stem cell research but approves “abstinence-only” programs, which increase unwanted births, sexually transmitted diseases and abortions; she tried to use taxpayers’ millions for a state program to shoot wolves from the air but didn’t spend enough money to fix a state school system with the lowest high-school graduation rate in the nation; she runs with a candidate who opposes the Fair Pay Act but supports $500 million in subsidies for a natural gas pipeline across Alaska; she supports drilling in the Arctic National Wildlife Reserve, though even McCain has opted for the lesser evil of offshore drilling.”
But my favorite part is where she says, “And American women, who suffer more because of having two full-time jobs than from any other single injustice, finally have support on a national stage from male leaders who know that women can’t be equal outside the home until men are equal in it. Barack Obama and Joe Biden are campaigning on their belief that men should be, can be and want to be at home for their children.”