Chris Brogan’s latest email had such gems of wisdom in it, I’ve just got to share it here.  Of course, he did give me permission.  🙂

I wrote a post today at chrisbrogan.com where one line seemed to resonate with people. “It took me 8 years to get my first 100 subscribers.” The outpouring that came back from people was that it really helped them feel validated that things weren’t exactly raging and roaring on their own quest for media dominance just yet. It dawned on me that we should talk about that again here. We should talk about success and how we perceive things versus how they are.
Overnight Success
Where does success come from? My parents were very loving and supportive of me. Did that help? Yes! But then, I know people who were hated by their parents and they succeeded. Was it my education? Well, I didn’t finish college. Did that matter? (Kinda: everything took more time, but then, I have no student loans). Did I know rich and influential people? Not really, no. Now I do. In droves. They don’t really do much for my success. They’re just swell people who are also successful.
Everything that should be an indicator of success isn’t, until you make it. You have had all the same opportunities as me. Maybe you’ve had more. Let me just talk about me for a moment, as a model for all this.
I am successful because I worked every single day, because I iterated, because I tested, because I was helpful as often as I could be, and because I was everywhere I could be to build presence.
I’m successful because I don’t brag, because I don’t ever believe the hype, because I had to learn how to not care about the praise every bit as much as I don’t care about the hate. I’m successful because I know who is my marketplace/buyer and I know who is my community.
Working On Your Success
Success for me meant sometimes not paying the mortgage. It meant not going to the crazy all night party. It meant flying places when I couldn’t afford lunch, so that I’d hide in my room if they weren’t offering meals at the event. It meant working hard. It meant that I had to try new things. I had to improve.
What was the magical formula? I found a way to be helpful and to make money from that. This is the magic success formula that everyone follows. Do something awesome. Learn how to make money. That’s it.
Dogfish Head, Sam and Mariah and everyone? They did it that way. Was it easy? Hell no! Earning shelf space is the fight there. Grocers barely give the craft category a chance. Sam and team earned it every step of the way. They’re making decent(ish) money now. Someone might buy them at some point. It will all work out.
Seth Godin. He made something remarkable, sold it to Yahoo! , and has lived ever since by teaching people how to be remarkable, too.
By the way, everyone you hold up as a potential model of successful? They were hungry. They were starving. They were under the gun to deliver. All of them.
Sir Richard Branson wasn’t born wealthy, plus he has dyslexia. Super Model Kathy Ireland didn’t make a billion dollars for her company by being beautiful, and even she slept on some airport benches on the way to that success. Tony Robbins couldn’t pay the bills. Skrillex was couch surfing and had over 60,000 in debt.
The Really Super Big Secret?
Refuse excuses. As of today, don’t permit yourself any excuses. “I can’t be successful because I have kids. I can’t be successful because I have a debilitating disease. I can’t be successful because someone has already done what I wanted to do.” Okay, on that last one? Lady Gaga. That’s all I will say about that.
You are Already Successful
Every day that you move things forward, you’re successful. Every day that you wake up and consider bathing, you’re successful. Every day I’m shuffling. (Okay, just wanted to say that.)
But to get to where you really want to be, there’s a tiny little map:

You in?
If you’re loving this newsletter, if it speaks to you, please forward it to those you think would like it. If THEY like it, I’ll ask them to subscribe here. If only YOU did this for me, and asked one friend to subscribe, I’d be very much appreciative. Thank you. It takes 2 minutes to think of who else might benefit from this, and to share this with them.
–Chris…
Human Business Works 110 Marginal Way #744 Portland, Maine 04101 United States (978) 378-0705

Just for fun, here’s a snapshot of me and Chris taken a month ago: 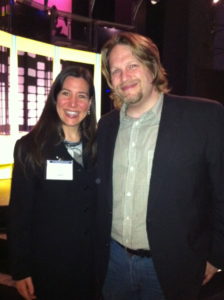 LOVE it. The truth can be so refreshing 😉

You are so right, Steve!

I don’t even know how I ended up here, but I thought this
post was good. I don’t know who you are but certainly you are going
to a famous blogger if you aren’t already 😉 Cheers!