The Impact of Inspiration

So, why are so many people who never cared about politics before suddenly almost fanatics?  It must be the Obama Effect.  I previously had only disgust and doubt about politics prior to Obama’s campaign and win.  We can never underestimate the power of influence that inspiration has as a leader and in business development.  People buy not only trust and confidence, but hope and possibility.  A great lesson for us all to remember as we lead and sell.  It’s amazing to witness the new hope and possibility in our country in place of the familiar old cynicism.  Of course, there’s still the economic fears, but even with those there’s a palpable new sense of hope.  Anyway, for those of you who haven’t yet discovered it, there’s a great new website of the Office of the President Elect, which I recommend checking out.
Want to read 50 facts you may not know about Barack Obama?
And just for fun, here’s our new President Elect’s high school yearbook picture: 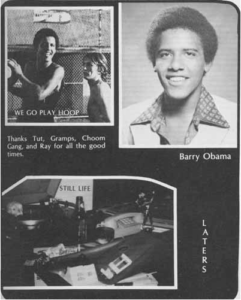 Hi Suzi,
I don’t think we as Americans have fully absorbed what having an inspirational president will mean to our country. You’ve done a great job in pointing out the implications.
All my best,
Susan

Thanks, Susan. I’m excited to see how his ability to inspire us might translate into more grassroots enthusiasm for creating actual change and real leadership by the people. Hoping he’ll be a transparent leader — seems like he will! I notice we continue to be inspired by the inspirational leaders of the past…Lincoln, Jefferson, FDR, Kennedy. Nice to know that Obama will be one of the forever memorable on so many levels. I’m proud to be American again! Whew, it’s been awhile!
🙂