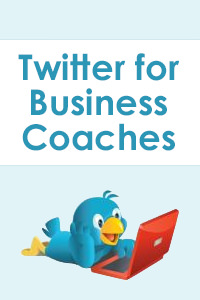 The Tool That Makes a Difference!

Are you a coach working in organizations or with leaders in need of a basic tutorial about social media?

Buy it now with: You can now, for a limited time only, get immediate access to Suzi Pomerantz’s Twitter For Business Coaches – Get Going Now Tutorial (audio that can be downloaded onto your computer, phone or other mp3 player and a rich, content-filled resource guide with links, tips, and the basics on navigating Twitter for success in your coaching business) for only $15! (The teleclass sold for $79, a savings for you of over 75%!)

Have you already signed up for Twitter, and now you’re just trying to figure it out? Have you given up on Twitter because it’s not intuitive and you just don’t get it?

Social media may be the next frontier, but there are real hurdles and pitfalls that stand in the way of savvy coaches and leaders. Not only are there the general issues of learning new technology and handling privacy concerns, but with all the platforms to choose from, how do we know when to use Linked In versus Facebook, or Twitter versus Plaxo? It can be overwhelming!

In ANY Economy, the Critical Factor in Getting and Keeping Coaching Clients is Networking from a Giver’s Mindset. Twitter is the Key to Connecting for FREE with Prospects, Partners, and Peers.

If you missed the Twitter Teleclass, you can now get all the same information at your own pace with this new Twitter For Business Coaches – Get Going Now Tutorial. Suzi Pomerantz, author of Seal the Deal and an MCC coach working with leaders and teams in over 150 organizations during the last 18 years has become the Twitter expert for business coaches, and now you can find out from Suzi how to get quick results on Twitter for your coaching business.

“I finally listened to your Twitter class this week – and it’s been very helpful. I now know where to find the people I really want to connect with and am steadily adding people. That has had an immediate affect on more people following me too. So I am finding my way with Twitter! Thank you so much for a great class.”

Have you Asked Yourself or Others these Questions about Twitter?

There is Power and Value in Twitter for YOU as a Leader and as a Coach.

Are you leveraging this phenomenal networking vehicle to advance your networking activities? Introverts and extraverts alike can succeed on Twitter!

Right now, at this very moment, there are more than 20 million Twitter-using potential coaching clients across the globe who are looking to hear from you. The best part is, you can communicate with them absolutely free!

Do you know how to reach this global community that is growing by upwards of 10 thousand new people each day? Do you know how to use Twitter to find which of those folks who are prospective coaching clients for you?

“one of the fastest-growing phenomena on the Internet.”

“Twitter is on its way to becoming the next killer app,”

“Suddenly, it seems as though all the world’s a-twitter.”

“Twitter is useful precisely because so many people are talking about different things at once.”

Only $15, this kit is chock full of resources and insight on how to use Twitter for YOUR coaching business.  Suzi will guide you through the initial setup of your Twitter account, help you determine who to connect with, and walk you through communicating in the Twitterverse (Twitter Universe)! The audio is in a MP3 format — perfect for your ipod or other MP3 player, or to listen to at your PC. The presentation is conveniently saved in a PDF format. Prepare to profit from the lessons of award-winning, “GAMECHANGER,” master executive coach Suzi Pomerantz wherever you are. Don’t delay. The time to enhance your game and get in in on the action is now!

Do you find Twitter to be Overwhelming and Complicated?

The problem with Twitter, like most of the new social media tools, is that it is not exactly what I’d call intuitive.  At first it can seem like an exclusive club if you don’t know how to interact or do things on Twitter. Then, there are the hidden pitfalls around the etiquette and protocols on Twitter, ethics, manners, etc. How do you find who to follow?  How do you do a tweet or a direct message or an @ reply?  Why would anyone care to answer the question “what are you doing now?”

Suzi created this class to share with you the insight she gleaned during a ridiculous number of hours spent researching, learning, and engaging in Twitter.  She shares best practices that will save you the time and frustration of trial and error and figuring it out as you go.

It can be hard for many talented coaches to grow a coaching business in good times, let alone in a tough economy where prospective clients are budget-conscious and managing costs.  As a business owner, Suzi knows that right now is not a time when we coaches are spending a lot of money for advertising or marketing.  That’s why Twitter is the coaches’ answer! It is a powerful and effective platform that’s a FREE way for you to get in front of people, a FREE way to integrate networking, marketing and sales, and arguably the best free networking vehicle you’ll find, with the most potential leverage, impact, and relevance to our work as coaches.

Here are just a few ways Suzi leveraged Twitter to create results in my first three months on Twitter, and she can teach you how to do it, too!

Get comfortable with the context for Twitter and how to leverage this powerful tool to build your network, expand your visibility, and create ongoing, instantaneous results! You’ll be ready to rock after you put Suzi’s tips and tricks into action!

Suzi will help you understand the foundation of everything Twitter:

It is completely safe for you to purchase through this site. We use Google Checkout, which allows you to use your credit cards and is backed by the trusted resources at Google. We will never compromise your security and privacy and we will not spam you!

It is completely safe for you to purchase through this site. We use Google Checkout, which allows you to use your credit cards and is backed by the trusted resources at Google. We will never compromise your security and privacy and we will not spam you!